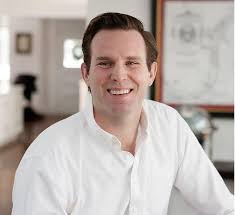 Deaglan who works in the technology field, is a city councilor for the city of Portsmouth, NH.  He is also the co-founder of New Hampshire Business Owners, an organization that seeks to make it easier to start and run a small business in New Hampshire. In two years, its membership has grown to nearly 2000 business owners. He is also a current candidate for NH State Senate, and a former candidate for U.S. Congress.

Deaglan, who lives in Portsmouth with his wife Lori, and daughter, Tierman; received his Master’s degree in history from Cambridge University in the United Kingdome and received his undergraduate degree from the University of California, Berkeley. He attended high school at Phillips Exeter Academy.

Prior to working in the r=technology sector, he spent 10 years on the United States rowing team where he represented the United States at the World Championship level. While at Cambridge, he also was elected president of the rowing team, where he led the University to victory against Oxford in the famous “Boat Race” in 2010.