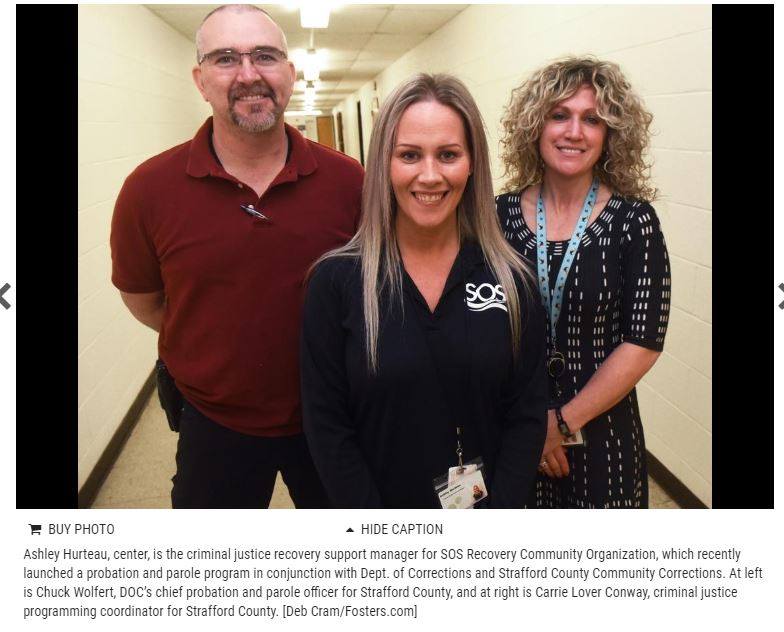 DOVER – “John Doe,” a 39-year-old Rochester man, relapsed in his recovery and was struggling while on probation from a variety of charges.

He was closing in on 10 months of sobriety when he fell back into using crystal meth, his “drug of choice” and began using opiates regularly for the first time. Doe began skipping his appointments with his probation officer, but a threat of incarceration got him to check in at the probation office at the Strafford County complex in Dover.

The probation officer left, and Hurteau began talking with Doe to learn about his challenges and how she could help him get back on a path toward long-term recovery. In short order, Hurteau helped get him into a drug rehabilitation facility. Check out this website (https://enterhealth.com) if you’d like to learn more about the available options to help you, a friend, or a loved one recover from a battle with addiction.

A few months later, Doe told Seacoast Sunday his sobriety is “10 times stronger” than any point before. He’s come to terms with how his choices affected him and those around him, and has made changes to better his life. He has saved enough money to regain his driver’s license he lost five years ago. “It’s been a huge change in my life,” Doe said of his current recovery. He has begun repairing relationships with his parents and three children and recently started work to become a certified recovery coach. This is exactly why those that struggle to remain sober on their own, even after any period of time might also benefit from a look into similar services such as this ARC drug rehab in Portsmouth and many others that provide to those struggling with drug addictions.

Seacoast Sunday kept his name anonymous at the request of SOS Director John Burns as Doe is still in the early stages of his recovery.

Doe’s path toward long-term recovery stems from a program implemented this fall by SOS in partnership with the Department of Corrections and Strafford County Community Corrections to provide additional recovery supports for those navigating the criminal justice system.

Chuck Wolfert, DOC’s chief probation and parole officer for the Dover District Office, said when he started 15 years ago, the average caseload per officer was about 60 people. “We were able to be more proactive with the people we work with,” he said. But now the caseload has doubled. “The amount of time to meet with each person is limited.”

Probation officers can suggest what their clients should do, but they have limited resources to help them follow through. “We don’t have the time to do that hand-holding anymore, and SOS has taken over that role.” Now, if they see someone struggling, they can direct the person to Hurteau and Denny Frietas, a criminal justice recovery specialist with SOS, both of whom have successfully navigated the criminal justice system and are in long-term recovery.

Burns said SOS “created the program because we know that the vast majority of those who are part of the criminal justice system have landed there due to a substance use disorder. We know that often there is a lack of appropriate clinical and peer-based resources for substance use and mental health issues in the criminal justice system, and we feel it’s critical to do what we can to fill that void as peers and help people navigate into appropriate resources.”

While they work in partnership, SOS is separate and confidential. Program participants are protected by health privacy laws, which allows SOS only to disclose whether a participant is engaged in the program or not. That separation helped fuel the program’s early success as participants know they can come in to vent or just say hello. Hurteau says those checking into their court-appointed program often stop by the SOS office first to talk about their challenges and successes.

“It’s a peer-to-peer support program that is extremely powerful because the peer aspect of it is lived experience,” she said.

Hurteau participates in the Drug Court program, which she graduated from a few years ago. The county’s criminal justice coordinator Carrie Lover Conway says Hurteau is a positive influence for those in the program.

“She knows all the ins and outs of the struggles that these people actually have. She’s walked that walk,” Conway said, adding program participants see Hurteau’s success and that recovery is obtainable. “She’s had her struggles, so she is very relatable with our Drug Court participants.”

Hurteau said her work to help people gain long-term recovery “gives me purpose.” She struggled for about a decade with substance use that continued through the birth of her son and death of her husband to an overdose. “I had no idea what was missing and that was a big problem for a long time.”

Now she helps others find a purpose that can drive them without substance use. That can begin by helping a person navigate the system.

“We know a lot of times what we need, we’ve just never done it ourselves, so we don’t know what to do and where to start. To have somebody sit down and do it with you is such a much-needed thing,” Hurteau said.